My son’s third birthday may have been more of a milestone for me, his mother, than it was for him. It was the first year that he expressed a preference for a specific theme and the first year he wanted to invite all of his preschool friends. We had to budget carefully in order to have a party that included everyone. To do that, we identified ways to cut down on the biggest expenses. In the process, I learned a lot about what makes a party special for a three-year-old boy.

Here are the major birthday party expenses and suggestions for saving money in each category without sacrificing the things that make the party special.

If you’re willing to invite your child’s entire preschool classroom, then you’re probably interested in renting out a playspace. Of all the playspaces we called, our local YMCA’s gymnastics facility was the least expensive. It’s where they hold gymnastics classes for kids ages 18 months through high school, and rent out the facility on the side.

It was a hit. There weren’t any planned activities during the hour, and the kids loved being able to cut loose. They ran back and forth on the trampoline, jumped in the foam pit, and crawled around an obstacle course.

If you have a local YMCA or other non-profit recreational spaces, poke around to see if they have any birthday rental spaces. If the party is in a warm season, you could have the party for free at a local playground.

I continue to be shocked at the prices parents pay for cool birthday cakes. I know that significant time, effort, and skill goes in to creating an awesome cake, so the price is justified. But whenever I’m faced with the opportunity to buy that kind of cake, I always balk. I’ve never been able to bring myself to pay that much for something that’s going to get eaten by kids that don’t know the difference between a cake made by Julia Child or Betty Crocker.

I decided to make the cake myself, which was a good idea because it saved me at least $30. Going on Pinterest for inspiration, however, was a bad idea.

A few of the my inspiration photos: cupcakes of different trains, tracks around the cake, Thomas cookies, and a “Snack Train.”

It was also a bad idea to try to decorate the cake on the day of the party. Silly me, I didn’t realize that (a) you can freeze cake and (b) you can decorate cake up to a few days in advance. I learned, at the last minute, that I didn’t even have the skills to write “Happy Birthday” on the cake without messing it up three times. Trust me when I tell you that one hour before the party is a terrible time to decorate a cake. Do it the night before. Better yet, you should bake the cake the weekend before, wrap it tightly in plastic, and freeze it. 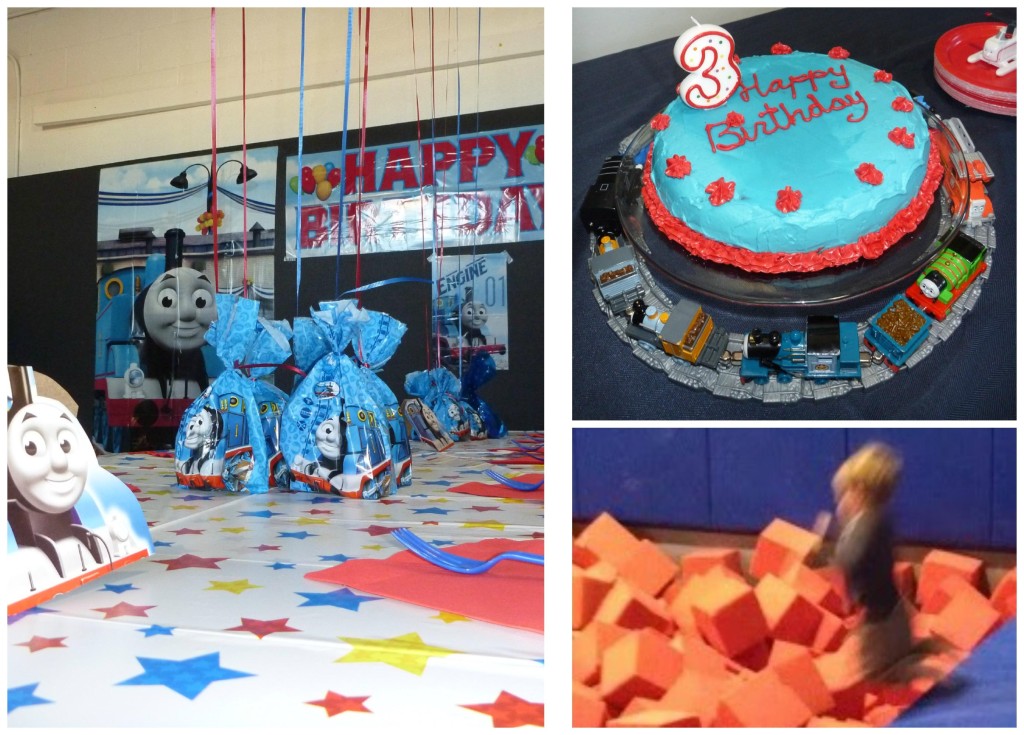 Keep in mind whose birthday you’re celebrating. Your preschooler will be psyched to eat cake. Period. The fact that it has his or her name on it is the cherry on top. As I was attempting to ice a Pinterest-worthy cake and failing, my son was starting at the cake with wide eyes full of delight and anticipation. He was just happy to have cake.

Although initially this was to save money, it was a bonus that his nut-free friends could enjoy the same cake that everyone else would (it can be hard to find a nut-free bakery).

Pinterest was also crawling with fabulously creative DIY décor. As much as I love to get creative and DIY, I was working full time and didn’t have the time. I also didn’t find any DIY ideas that would save us any money when I could pay just $20 for Thomas-themed tablecloths, treat bags, and a big Thomas image for the wall.

They were not Pinterest-worthy. They were cheesy and cheap. And awesome for three-year-olds. My son and his friends’ faces lit up as they gleefully discovered their favorite trains on the tablecloth and they exclaimed over how big Thomas was in the picture hanging on the wall. No one cared that the plates and napkins were the “value pack” red and did not have Thomas characters on them.

I hate waste, so I decorated the room with the favor bags and tied them up with balloon. So, the décor became the party favors and we didn’t have to live with 30 balloons in our home over the next month. My son’s birthday is after Valentine’s Day, so I was able to snag some of the low-cost items sold in high-volume packages for Valentine’s Day, like bubbles, play doh canisters, and Thomas stickers.

In one of my crowning achievements as a couponer, I used coupons during a sale on Thomas fruit snacks, and got them for $0.40 a box. I cut the images off of the nine boxes of fruit snacks and used them for centerpieces. Cheesy? Yes. Toddler-smile-inducing? You bet. I even spotted some kids playing with the cutouts, which made my heart happy.

What made my heart the happiest of all: My son and his friend’s delight at seeing the tablecloth trains? One little guest’s surprise at seeing a Thomas picture twice his size? The pride in my son’s eyes when he was presented with a cake and a candle to blow out? Nope. It was the sound I heard right before I walked from the party room to the gym. If I could bottle it, I would. Squeals, giggles, laughter, and shrieking (the good kind) as 20 preschoolers jumped into a pit of foam blocks, bounced on a trampoline, climbed over mats, and slid down slides.

None of that had anything to do with the cake, the decor, or the party favors. It was unadulterated fun. Well, I did see one or two adults in the foam pit.

Rebecca blogs over at Stapler Confessions about her journey digging out of $200,000 in student loan debt by living frugally and snagging free batteries at Staples. She also shares and tweets about great deals that help people live a frugal life. Join in on the fun!

11 thoughts on “Preschooler Birthday Budgeting: How to Have a Blast without Blowing Your Budget”