I myself have never been a server, but I know the importance of tipping. If I receive decent service, I’ll tip 15%. My definition of decent service is being friendly, delivering the food in a timely manner, asking if I need anything else, you know, the usual stuff. I’ve rarely received amazing service, but the odd times I have, I will tip almost 20%. Mind you, the server would have to go above and beyond what they normally do.

Everyone knows that with certain professions you are expected to tip. Some of these include restaurants, bars, hair dressers, spa services, taxi drivers and food delivery people.

I have no problem with giving them a tip because they are providing a service. Obviously the tip percentage varies, depending on the type of service. For example, I would tip a pizza delivery person way less than what I would tip my hairdresser. I have long thick wavy hair which is a blessing and a curse at the same time. My hairdresser seems to be the only one who knows how to cut and style my hair in a way that requires very little maintenance.

Coffee shops, such as Starbucks often have tip jars by the front cash. I rarely buy a fancy five dollar drink at Starbucks.  I usually just purchase the regular coffee. However if I did want to splurge and buy a five dollar drink, I wouldn’t tip because the drink already cost me five dollars. I do respect the fact that these baristas do go through training and it does take a bit more effort to make a cappuccino (or a no whip soy latte mocha-frappe-cappuccino) versus drip coffee, but does it really warrant a need to get rid of my extra change? Then I’d be paying MORE than five dollars for a drink. 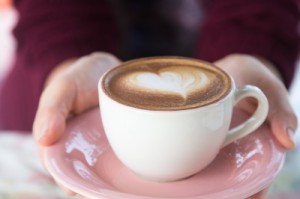 I have noticed in the food courts that some food vendors also have tip jars by the cash.  The food is already made and right in front of you, so basically all that the employee is doing is scooping it onto a plate, just like Lunch lady Doris would in your high school cafeteria. If anything it should be the cook in the back getting a tip. But even then, isn’t a lot of the fast food  ready to cook frozen stuff or requires very little preparation?  Again, except for my brief stint as a hostess (by brief I mean two weeks), I don’t really have any experience in the food service industry so I couldn’t tell you for sure.

The same goes for gelato and ice cream places. Is scooping ice cream or handing me samples of gelato with those tiny plastic spoons really that labour intensive? Unless I see you actually making the ice cream by hand, i.e. crushing that ice, then I am just going to pay the price of the ice cream and nothing more. Sorry.

It seems that major fast food establishments are the only places that don’t have tip jars right by the cash. Perhaps it’s because they find it tacky?

So where do you draw the line when it comes to tipping? Sure it’s only loose change, but it can add up if you feel obligated to tip everywhere. In most cases (except with restaurants that say for larger parties, a gratuity is added automatically. Ok fine, but when it’s almost 20% and I get crappy service that is NOT FINE), tipping is expected, but still optional.  I find when I’m on vacation; I tend to tip a lot more than usual.

Do you feel everyone is asking for tips these days? What’s your tipping strategy?

19 thoughts on “Tipping Here, There and Everywhere”